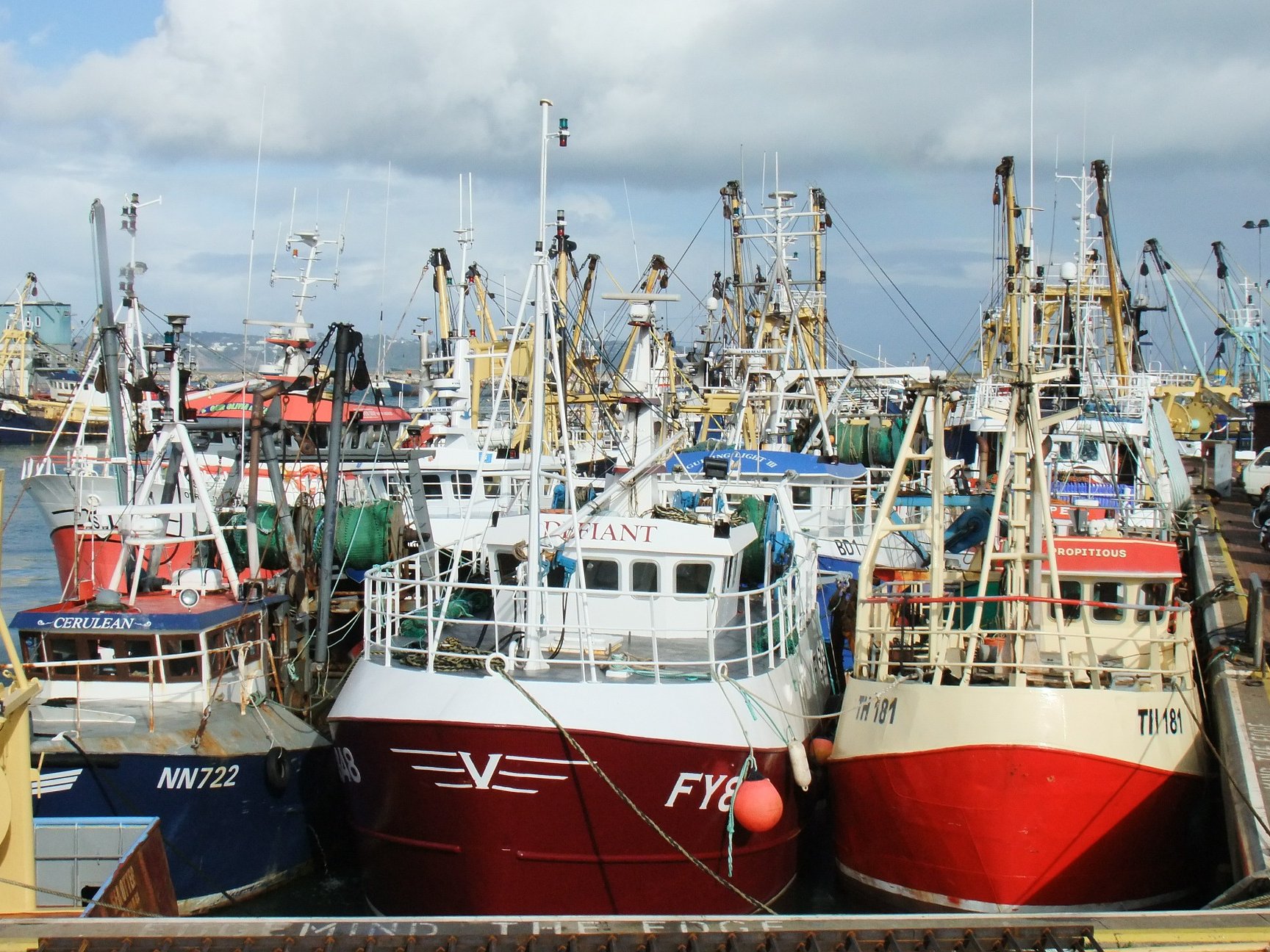 Our beautiful oceans are home to up to 80% of the total life on earth. They contain stunning marine life that is vital to the earth’s environment and climate. For example, when dolphins and whales return to the surface to breathe they fertilize tiny marine plants called phytoplankton which every year absorb four times the amount of carbon dioxide than the Amazon Rainforest. This generates up to 80% of the oxygen we breathe. There has been a worldwide ban since 1986 on the hunting of these stunning and intelligent creatures, however, some areas of the world continue to do so with the support and cover of their governments, due to the billions of dollars generated by the commercial fishing industry.

The seaside town of Taiji, Japan, holds an annual dolphin drive that is fueled by the captivity industry; a single dolphin can sell for $150,000 or more to the world market. During this senseless act, fishermen on average will kill 12 dolphins for every 1 captured. This is because they believe that dolphins are direct competition for their fishing fleets – the less dolphins in the sea, the more fish for them to catch. In reality, the reduction in catch is due to unsustainable fishing practices which have caused a crash in the fish stocks.

However, this is only one example of the brutal impact commercial fishing has on ocean life and does not come close to the global mass slaughter of these wonderful creatures. On the Atlantic French Coast it is estimated that up to 10,000 dolphins are caught and killed as bycatch a year. Bycatch is the unintentional collateral kills when fishing for selected species. This has been happening for over 30 years, but has been expertly covered up by the French government.

Sadly, it doesn’t stop there. All together, over 300,000 dolphins and whales are killed every year as bycatch for commercial fishing; that is mass slaughter on a scale almost unfathomable to anybody with a heart. Unfortunately, there are so many other sea animals vital to the health of the earth that are also being caught up in this industrial fishing horror.

Sharks play a huge role in the well-being of the oceans as they keep fish stocks healthy alongside keeping marine ecosystems balanced and coral reefs alive. For example, the Save our Seas Foundation has studied the impact of tiger sharks on seagrass ecosystems. The presence of these sharks prevents green turtles from overgrazing the seagrass beds, making these shark populations critical to the survival of seagrass ecosystems, including their role as carbon sinks. Large predators like sharks are actually effective carbon sinks themselves, so having healthy population levels of them in our oceans could help to reduce the volume of carbon dioxide being released into the atmosphere.

However, with the constant overfishing of shark species, they could be caught and finned into extinction. With a huge decrease in shark populations in the last few decades, this could soon become a reality. Bull and smooth hammerhead sharks have seen a decrease of 86% and there has been a worrying decrease of 99% of scalloped hammerheads in our oceans today.

If shark extinction were to happen, the world’s oceans would turn into swamps, which would directly lead to the extinction of the human race. For those who believe humans surely couldn’t be all to blame for this drop in population let’s put it into perspective. Sharks kill around 10 people per year, usually by accident, whereas humans kill 11,000 to 30,000 sharks per hour. Our malicious mass-slaughter of these beautiful creatures cannot continue if we want a long and prosperous life on earth.

We are slowly killing our earth through our oceans. For years we have been told it is due to the plastic waste that we dump on our shores. This is true, with 150 million tons of plastic floating in our oceans today. It slowly disintegrates into microplastics and when ingested can block the gastrointestinal tracts of organisms, tricking them into thinking they don’t need to eat, leading to starvation. This has become apparent in recent years with thousands of whales, dolphins and other sea animals being washed up on our shores with stomachs full of plastic. These microplastics shockingly already outnumber the stars in the milky way by at least 500 times.

“The shocking amount of plastic in our seas has gotten so bad you can find huge rubbish patches floating in the ocean, like the Great Pacific Garbage Patch.”

The Great Pacific Garbage Patch stretches out over 150 million square kilometres, putting countless amounts of marine life in danger. As grim as this ocean pollution is, there is also another factor of plastic pollution that isn’t talked about enough. Of all the waste in the ocean, 46% of it is abandoned fishing equipment. Not only is this a truly shocking statistic, but fishing nets are specifically designed to trap and kill marine life. So not only are the active 4.6 million commercial fishing vessels destroying our seas and the life within it, but they are leaving an everlasting trail of destruction behind that lurks in our seas, continuing the slaughter day by day. 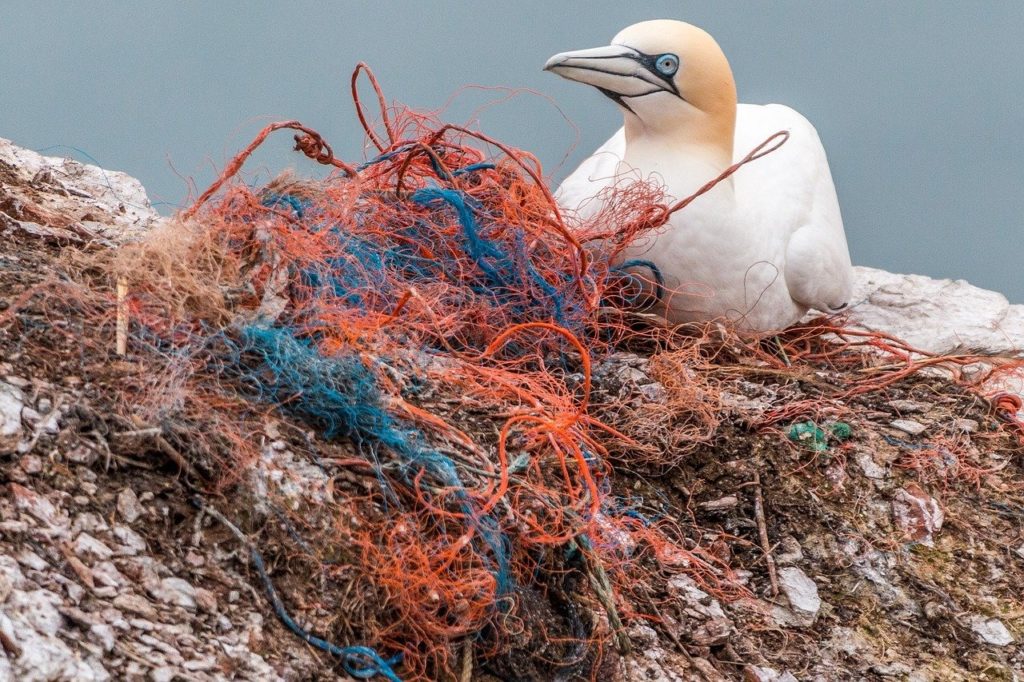 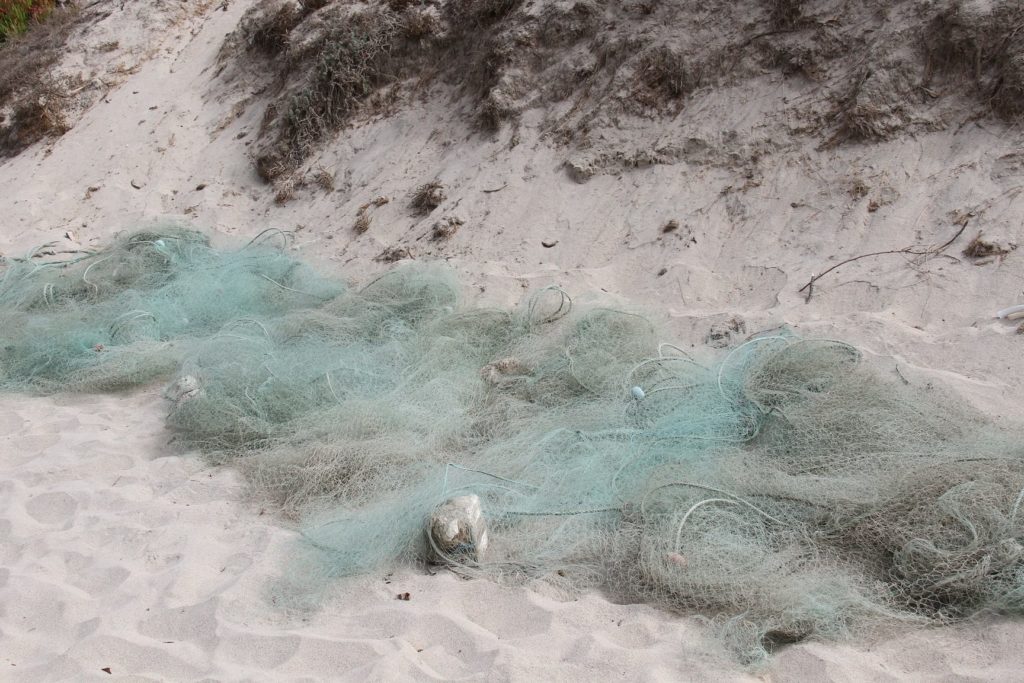 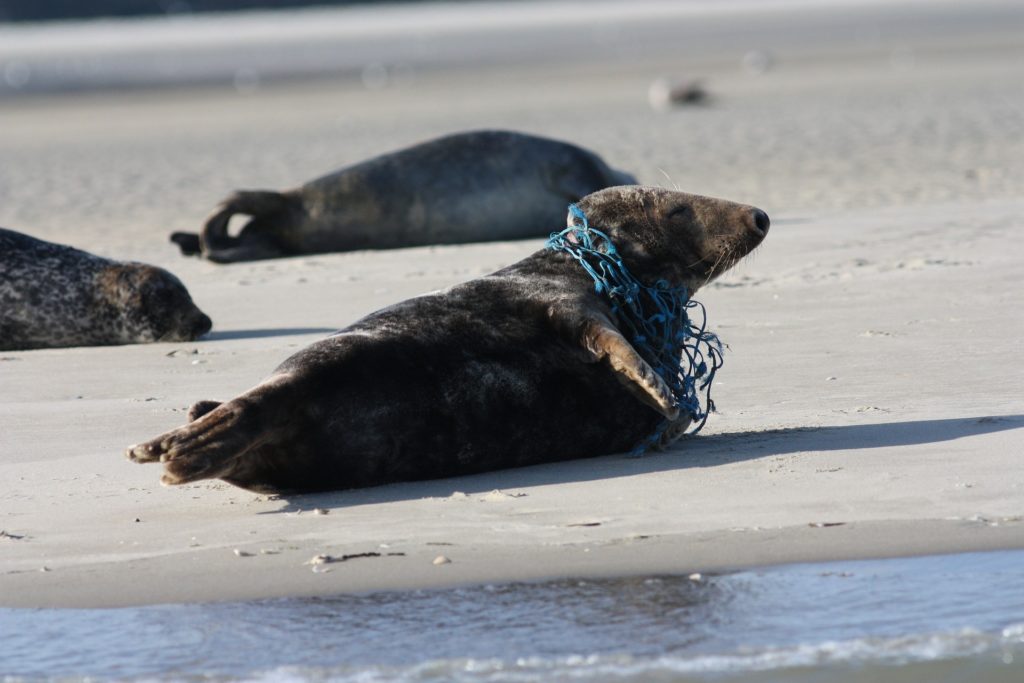 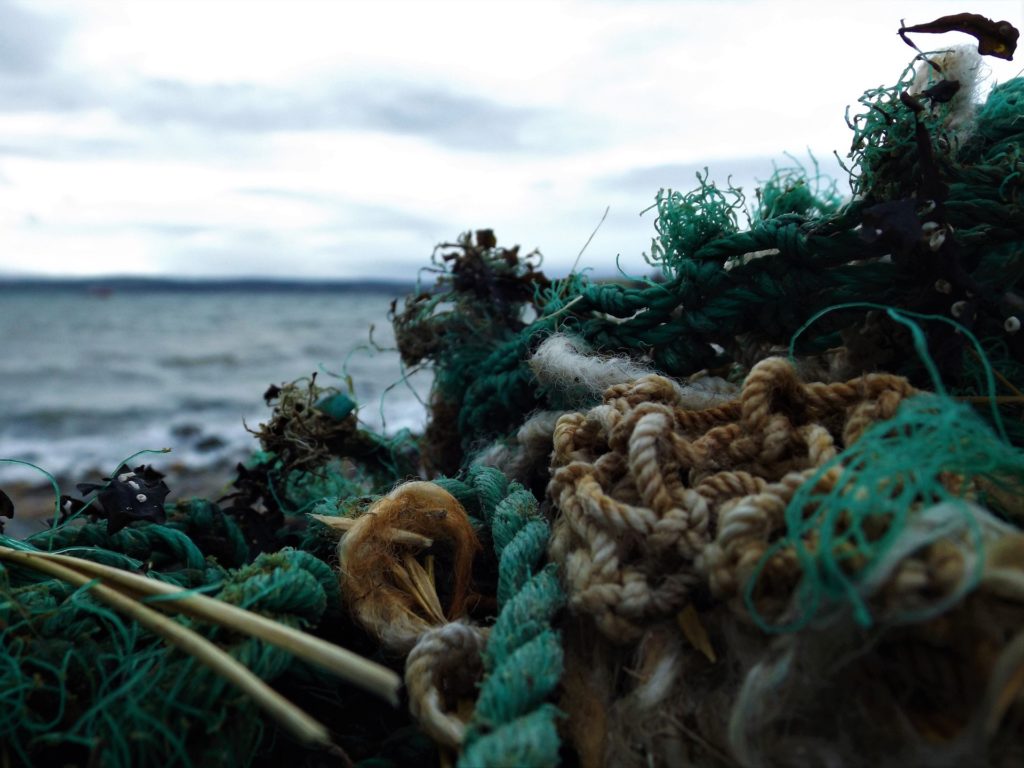 There is mass media coverage in regards to ocean pollution. We are swamped with headlines preaching that plastic straws are killing so much sea life they need to be banned and replaced with biodegradable or sustainable materials. Although this is a positive first-step into replacing plastic, these sensationalised, viral headlines have been covering the story just to avoid the bigger issue.

We are shown videos of sea turtles with a straw up its nose and although this is horrific and sad, it doesn’t begin to touch on the endless horrific death toll of these creatures. Yes 1,000 turtles die a year due to the world’s plastic. However 250,000 die from fishing in the US every year. We need to face the real issue. Commercial fishing.

Why does Ocean Biodiversity Matter?

You might be asking “what’s the importance of these different species and whether they go extinct or not?”. The answer to that question is that they all play their part; each species have an important role in keeping the ocean healthy. Coral reefs can only live and thrive due to fish, and fish can only do the same because of coral reefs.

This is just one example of the many beneficial symbiotic relationships that would collapse with species extinction. The reefs help the earth in many ways, including by protecting our coastlines from storms and erosion. This is more important than ever as, due to rising sea levels, without reefs our shores would be left desperately vulnerable to the onslaught of the increasingly extreme storms cause by climate change.

From a personal perspective, the sheer importance of our oceans’ survival means more than just the repopulation of marine life; the general health of our oceans is vital to a sustainable future. We need the oceans just as much, if not more than we need the land. This is due to our oceans producing over half of the world’s oxygen and also absorbing 50 times more carbon dioxide than our atmosphere.

So it’s not just a case of sea animals being hunted to extinction and coral reefs dying out. All living things in our oceans work together to allow humans and land animals to breathe air. If this wasn’t vital enough, our oceans also control weather patterns. As they cover 70% of earth, the oceans send heat from the equator to the north and south poles regulating our climate.

“When humans dump load after load of trash and waste into our oceans, in reality we are just putting another foot in the grave of our beautiful world. ”

I believe that we could definitely move towards more sustainable fishing practices to responsibly harvest the fruits our seas. For starters we could regulate where and when we fish areas to allow for certain fish species to repopulate. Additionally, there are fish companies that pride themselves on sustainable ‘dolphin safe’ fishing, when really there are no officials to ensure this is carried out. So I believe the successful implementation of marine safeguarding officials onboard commercial fishing boats would greatly benefit those marine animals that every day get killed pointlessly.

These ideas are only a few of many that have been thought up by the incredible people and foundations that care for our oceans. However, our world is full of selfish, greedy people who do not care for our oceans and the magnificent creatures that live within it. Because of this, I do not believe that we can stop the meaningless killing and polluting of our oceans in this generation. But by the time the next generation comes around, it may be too late.

The Future of the Climate and Commercial Fishing

The absolute importance of our oceans and the wonderful life that lives within is clear. Although there are charities and businesses making the right moves towards reversing the damage we have already done, there is so much more to be done moving forward. Without a single ounce of plastic being dropped in our oceans from this day forward, the abundance of waste already dumped into our waters and the countless lives lost to commercial fishing will continue to be detrimental to the survival of our oceans, land and climate. Unless we act now to combat the impact of commercial fishing and ocean pollution on our climate, we will forevermore be putting humanity at risk. 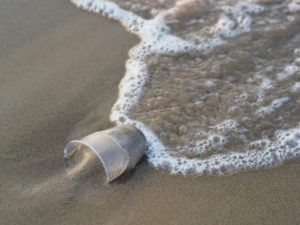 Plastic Versus the Oceans

Plastic pollution is an ever-growing threat to life in the ocean – a fact that’s now become normalised. ... 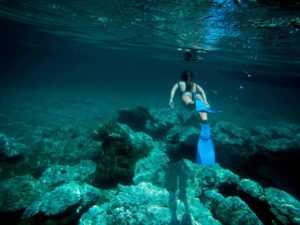 The economic benefits of tourism on the island of Curaçao are undisputed, with the revenue enabling much-needed developments ... 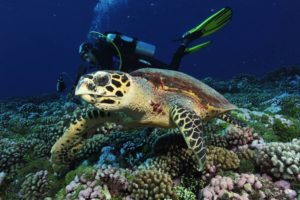 Marine Conservation in the Maldives

The oceans play a crucial role in the global climate system. Ecosystems below the surface have changed dramatically over the ...