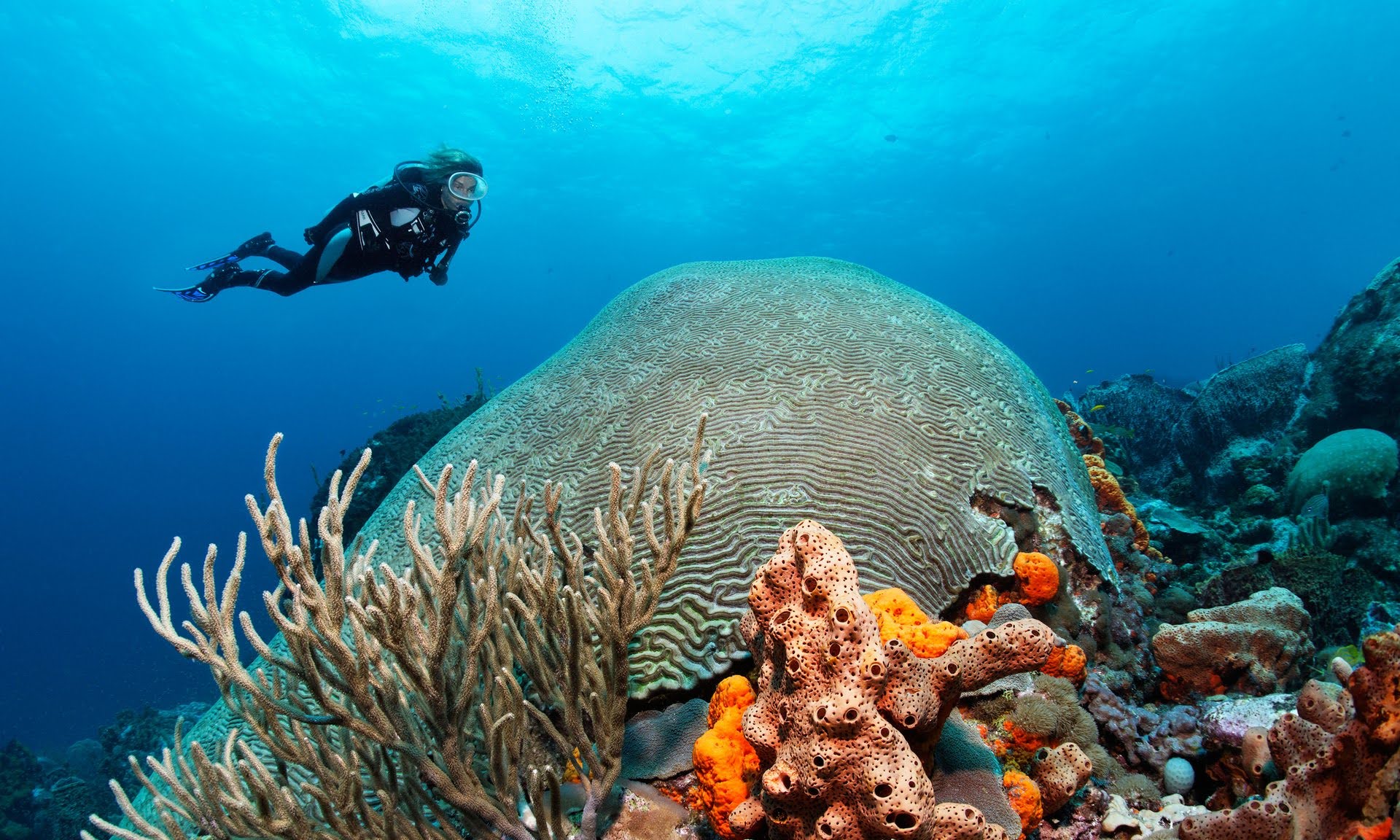 The Caribbean is famous for its colonial history, its legendary days of piracy and all the sandy beaches that people flock to its islands for. However, existing within and amongst all of this, and far longer before that, is an ecosystem rich in biodiversity. Thousands of endemic species live on the islands and in the seas of the Caribbean, but like so many other places, this vast expanse of life is under threat.

“There are things you can do when booking your holiday to ensure that your impact on the environment is minimal, or even positive.”

Biodiversity across the Caribbean Archipelago

Let’s start by looking at just how much life exists here. On land it is thought that there are up to 13,000 different plant species growing in the Caribbean, about half of which are endemic to the region. This incredible variety of flora owes its existence to a tropical climate, supported by the topography and soil types found here, the variety of which allows a huge array of different types of plant to thrive. Endemic plants include the Guaiac Wood tree, which plays host to the national flower of Jamaica, and the Ceiba tree, which is the national tree of both Puerto Rico and Guatemala.

Aside from birds, of which there are 600 species living in the Caribbean, the dominant group of animals is the reptile, numbering some 500 species. However, whilst just a quarter of those 600 bird species are endemic, that percentage leaps to a staggering 94% for reptilian species, with only a handful of reptiles such as the Green Iguana being invasive. In addition, there are 170 amphibian species living on the islands of the Caribbean – and every single one of them is endemic.

Moving into the waters, the Caribbean Sea plays host to around 9% of the world’s total area of coral reefs. These reefs, which include the Belize Barrier Reef (a world heritage site since 1996) and Great Mayan Reef, cover an estimated total of 19,000 square miles. Not just a pretty picture, they play a pivotal role in maintaining the health of these waters – so much life is dependent on these huge swathes of coral that line the shores of the Caribbean islands.

Approximately 1000 different types of fish, as well as sea-faring mammals such as whales, seals, dolphins and manatees make up the atoll. Many of these animals’ ancestors started out in the Indian and Pacific oceans, the latter of which was directly connected to what is now the Caribbean Sea until as recently as 3 million years ago, when the Central American Seaway was filled in by the Isthmus of Panama. This Isthmus connected the two American continents by land and blocked off that link between the two oceans. What had already passed through beforehand became the ancestors of the region’s current sea life.

Protecting coral reefs isn’t just vital for the reefs themselves. Coral reefs support other marine ecosystems that live nearby, such as mangroves and sea grass beds, by providing them with protection from things like large storm waves by absorbing their energy and weakening them. They’re also important to us; they can provide us with food, regulate sea temperatures, and help protect the shorelines of the islands they live beside.

Whilst tourism can be detrimental to the oceans, particularly through certain activities such as Scuba Diving and Snorkelling if managed incorrectly, making the right choices can actually benefit the oceans. This includes choosing to stay in places that implement eco-friendly initiatives, such as Divi Southwinds Beach Resort, that help keep the local environment healthy and sustainable. Making the decision to travel sustainably is important, because as the article’s title suggests, all is not well in these waters today.

Despite the fact that the link has been closed, the reefs are still under an invasion from the Indo-Pacific region. In the 1980s, a species commonly known as Lionfish was brought to the USA for use in aquariums. Some of these Lionfish were released into the Atlantic, off the coast of Florida, and have been wreaking havoc ever since.

Lionfish are venomous fish with a large appetite, willing to consume almost anything that swims in front of them. Parrotfish appear to be a favourite meal for the Lionfish, a fact which does not bode well for the coral reefs, which need Parrotfish to keep them healthy. Their appetite, coupled with the fact that they have no natural predators in this region, make Lionfish an apex predator of the Caribbean Sea.

As far as the reefs are concerned, the Lionfish’s ever-increasing presence is nothing short of an alien invasion, threatening their very existence, and all those that call the reefs home by extension. 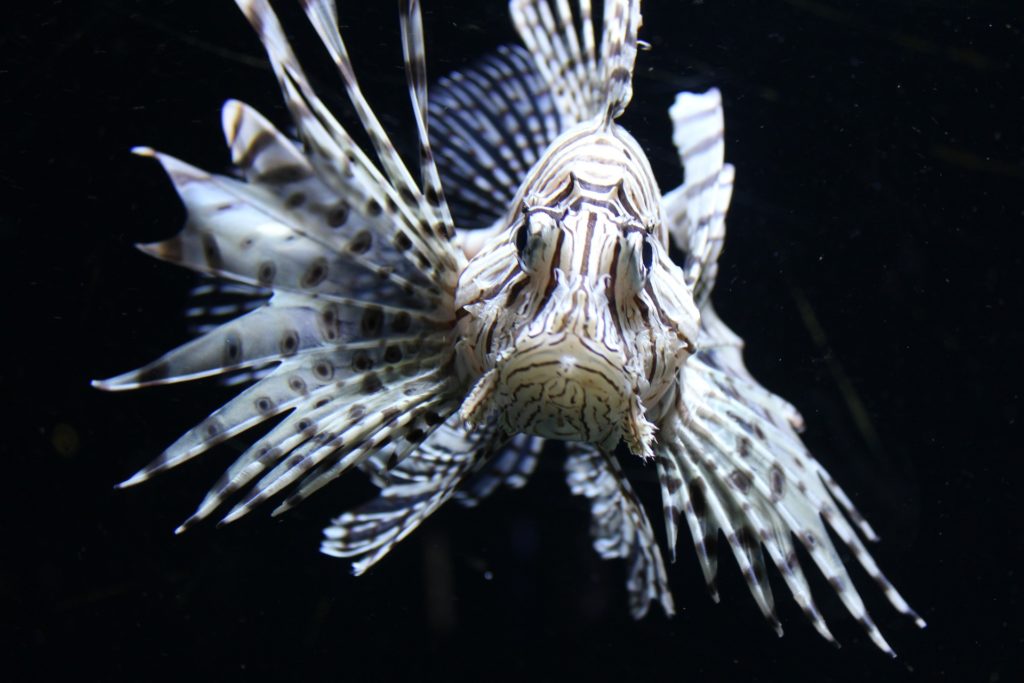 Lionfish contribute to the degradation of the coral reef however, they have a powerful ally in the form of climate change, which is the more obvious threat to the reefs. It is well known that increasing ocean temperatures directly result in coral bleaching, a fact which the Caribbean reefs have not escaped. The once-colourful corals in the Caribbean have now been completely bleached to which extends to 42%, and a huge 95% of them are showing at least some whitening.

Coral is made up of vast numbers of polyps, minuscule animals which come together to create coral. These polyps feed on Zooxanthellae Algae, which is actually what gives coral its amazing array of colour. But these Algae are fragile, needing precise living conditions to survive. As water temperatures rise these conditions are being altered, leading to mass death of these Algae. Without their food source, the polyps quickly die, the colour of the coral is lost – hence “bleaching” –  and the whole system crashes down.

The most famous example of this is in the Great Barrier Reef off the coast of Australia, but it is far from the only major reef under threat. As mentioned earlier, the reefs in the Caribbean make up around 9% of the world’s total mapped reefs – but that number is thought to have once been as high as 16%.

Hope on the Horizon

The Caribbean people have spearheaded their own efforts as Scuba Divers often partake in spearfishing, an effective way of clearing the local waters of Lionfish. You can make Lionfish Spearfishing part of your own trip as well; there are a number of operators across the Caribbean, including in Aruba and Barbados, that will take you on a hunt and allow you to do your bit for the Caribbean corals and everything that lives there.

On a more natural end, some species of Grouper have been seen feeding on Lionfish. Unfortunately, the Lionfish breed and expand far too fast for the less voracious Groupers to keep up, and as time goes on, the marine ecosystems in this part of the world are slowly being, quite literally, eaten away.

As for the oceans, climate change continues to warm the seas and the increasingly detrimental effects this is having to the coral is a huge danger for the area. It is estimated that up to 40% of the Belize Barrier Reef has been damaged since 1998, and though coral can recover from bleaching, it is unlikely as they become far more prone to diseases which kill them off entirely.

There are things you can do when booking your holiday to ensure that your impact on the environment is minimal, or even positive. In addition to the Lionfish Spearfishing mentioned, you can stay at a dedicated eco-friendly location, such as the ECO Lifestyle and Lodge in Barbados, a Green Globe Certified accommodation which specialises in sustainable and eco-friendly practices. This would ensure that your time at the hotel is as environmentally friendly as possible. Additionally, you could consider your transport methods: why hire a car if public transport already exists? Choosing not to go Scuba Diving or Snorkelling during your stay will also aid the coral reefs.

“The Caribbean is a fantastic holiday destination, one of the most popular regions in the world. However, its life, particularly underwater, is under threat, and it’s important to be aware of this so you can do everything possible to minimise your impact.”

It is said that there are so many beaches in Antigua that there is one for every day of the ...

The Dominican Republic is the second largest country in the Caribbean, and is a haven of tropical rainforests, fertile valleys, ...